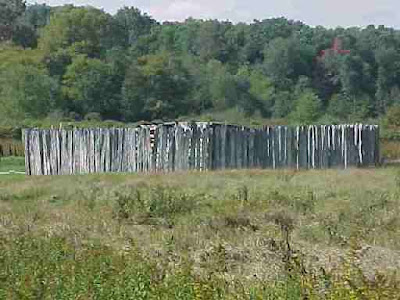 Click Here for the Actual 1754 Printing of
Washington's Articles of Capitulation
Courtesy of Estoric.com

"George Washington arrived at the Great Meadows, as the Fort Necessity area was than called, on May 24, 1754. Although the meadow was nearly all marsh, he believed it "a charming field for an encounter" and ordered his men to set up an encampment. Three days later, after hearing that a group of French soldiers had been spotted about seven miles away on Chestnut Ridge, Washington and 40 men set out to find them. At dawn on May 28, the Virginians reached the camp of Tanacharison, a friendly Seneca chief known as the Half King. His scouts then led them to the ravine about two miles to the north where the French were encamped.

The French, commanded by Joseph Coulon de Villiers, Sieur de Jumonville, were taken by surprise. Ten were killed, including Jumonville, one was wounded, and 21 were made prisoner. One man escaped to carry the news back to Fort Duquesne. Washington's command suffered only one man killed and two wounded.

Fearing "we might be attacked by considerable forces," Washington undertook to fortify his position at the Great Meadows. During the last two days of May and the first three days of June, he built a circular palisaded fort, which he called Fort Necessity.


The rest of the Virginia regiment arrived at the Great Meadows on June 9, along with supplies and nine swivel guns. Washington's command now totaled 293 officers and men. He was reinforce several days later by about 100 men of Capt. James Mackay's independent Company of regular British troops from South Carolina. Washington's attempts to retain his Indian allies were not successful.

While the South Carolinians remained at the Great Meadows. Washington and his Virginians spent most of June opening a road from Fort Necessity to Gist's Plantation, a frontier settlement in the direction of the forks of the Ohio. Reports that a large force of French and Indians was advancing from Fort Duquesne, however, caused him to withdraw his men to the Great Meadows, where they arrived July 1. 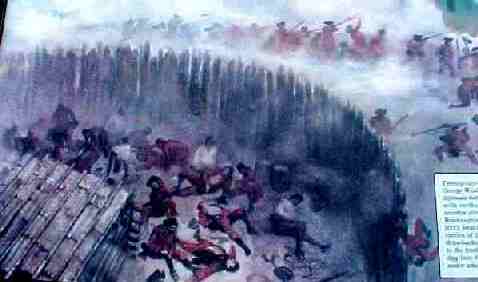 The next day, they strengthened Fort Necessity by improving the trenches outside the stockade. On the morning of July 3, a force of about 600 French and 100 Indians approached the fort. After the French took up positions in the woods, Washington withdrew his men to the entrenchments. Rain fell throughout the day, flooding the marshy ground. Both sides suffered casualties, but the British losses were greater than French and Indian losses.


The fighting continued sporadically until about 8 p.m. Then Capt. Louis Coulon de Villiers, commander of the French force and brother of Jumonville, requested a truce to discuss the surrender of Washington's command. Near midnight, after several hours of negotiation, the terms were reduced to writing and signed by Washington and Mackay. 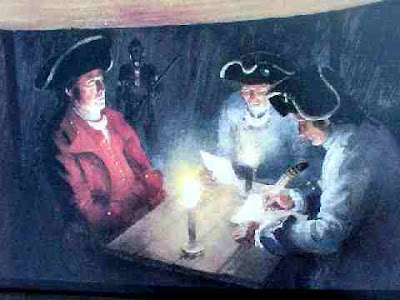 The British were allowed to withdraw with the honors of war, retaining their baggage and weapons, but having to surrender their swivel guns. The British troops left Fort Necessity for Wills Creek on the morning of July 4, From there they marched back to Virginia. The French burned Fort Necessity and afterwards returned to Fort Duquesne."

The Congressional Evolution of the United States of America

Presidents of the United States of America

Capitals of the United Colonies and States of America

Book a primary source exhibit and a professional speaker for your next event by contacting Historic.us today. Our Clients include many Fortune 500 companies, associations, non-profits, colleges, universities, national conventions, PR and advertising agencies. As a leading national exhibitor of primary sources, many of our clients have benefited from our historic displays that are designed to entertain and educate your target audience. Contact us to learn how you can join our "roster" of satisfied clientele today!

Primary Source exhibits are available for display in your community. The costs range from $1,000 to $35,000 depending on length of time on loan and the rarity of artifacts chosen.

No Taxation Without Representation

US Bill of Rights

*** President of the Confederate States of America